When Luca first started swimming lessons in Feburary of 2018 it was a very rocky start with Luca refusing to get in the water and suffering from severe anxiety and consuming fear.  For the first 3 weeks we would bring his most favourite bath toys and we sat on the outside slowly encouraging him to the waters edge by making a game of spraying him with water.  Gradually Luca slowly made his way to the edge of the pool and the day he finally agreed to get in was such a huge proud moment for me.  His progress since those first couple of lessons has literally blown me away thanks to the incredible support and guidance of the instructors who have worked with him.

Luca now loves getting in the pool and recently graduated to level 5 where he can swim independently in the pool and is in fact swimming the length of the pool on his own.  His confidence has blossomed, his anxiety has gone and he no longer has any fear of the water.  Best decision I ever made was putting him in lessons and gently persisting through his fears.

Caitlyn has been attending Sue Pryor Swimming for 10 years now, she began as soon as she was old enough as a baby with mum in the pool.  Her independence grew and she has loved every minute since.  She has participated in school holiday lessons that progressed her even more.  She is so capable in the water now and has lots of confidence when swimming in school teams and when we are away on holiday too.  We have been pleased with her efforts and I think Karen has been her teacher for almost all of her time at Sue’s – what a great relationship they have.  This may not be the end of lessons for Caitlyn, perhaps just a break as you never know what the future holds.  Caitlyn has also made great friendships with her fellow class mates too.  So much more than just swimming is gained by being part of Sue Pryor Swimming.  It is a great testament given her mum cannot swim – we have made an effort to make sure she is as safe as she can be around water.  We still continue to recommend the program to all of our friends and new families to the town.

I wanted to say thank you. We have been attending each term and holiday swims for the past 3.5 years. There were quite a few times we thought of skipping a term or holiday lesson and questioned the sequence and methodology of learning certificates but something has clicked with her and she's never looked back. Our nearly 5 year old child has gone from screaming and showing no interest to confidently swimming the length of the pool by herself, working on her stroke techniques and loving her weekly lessons. She has far exceeded our expectations and for that we are grateful to everyone at SPS.

In January 2012, we were holidaying on Kangaroo Island.  My husband (Tim) and his family have been holidaying in the same place for over thirty years.

A couple of times every year, the river breaks and flows into the ocean.  On this day we watched (over a two hour period) as a trickle turned into a surge.  Our boys were having lots of fun riding the water, which was flowing down the beach.  All of a sudden the force of water from the river was stronger than the oceans waves and with a small slip, our son Mitchell was sucked out to sea and within a matter of seconds was well out past the breakers.

Mitch is a very competent swimmer and a member of the Strathalbyn Swim Club.  He is fit and used to hours of swimming training – this was very different.

The first thing Mitchell said (very shakily) after being caught in the rip was that he remembered everything he had learned from swimSafer week.  He tried to swim back in, but knew straight away it was way too hard and that he must be caught in a rip.  He let himself go with it for a bit and then swam to the side (this is very sugar coated – he was exhausted when he came in and still very shaken).

Tim also recalled what he had learned in a ‘swimSafer Week’ lesson regarding the use of floatation devices for rescues.  He grabbed a nearby surfboard and swam it out to Mitchell.  If he had entered the rip without this, things may have been a lot different.

Our three boys have all learned to swim at Sue Pryor Swimming.  I admit that we sometimes thought ‘Safety Week’ was not worthwhile.  We would rather our kids be learning how to swim and how to perfect their strokes.  The message seemed to be the same every-time – so why did we need to do it again?  We do not think this way anymore!

Our family enjoy the water and we also have a pool.  We have always discussed how to save someone if they fall in the pool or if they’re in trouble themselves and how to spot a rip – on this occasion it wasn’t there to spot.

My advice to any parent would be the following:

* Make sure you’re child is the very best swimmer they can be – you may think swimming lessons are expensive but they’re worth every cent!

* Listen, pay attention and reaffirm all that is said at Safety Week (I’ve been guilty of chatting – it’s as much for us as for the kids).

*Be prepared every single time you go near water - make sure you have something/anything if the worst happens and ALWAYS be watching where your kids are in the water.

I never thought this would happen to us and it was a real reality check. We were very lucky Mitch is an excellent swimmer and we had a surfboard.  We are also so extremely grateful that at Sue Pryor Swimming, our family were educated how to react in this situation.

We had an incident a couple of weeks back where we were picking blackberries in Cox Creek at Mylor near where it joins into the Onkaparinga River. They were pumping into the Onkaparinga and as a result the river level was reasonable – we were about knee deep in most places. We had the kids with us and all was well until Raph (4) stepped over a log and virtually disappeared in about 4ft of water. Thanks to what he had learnt at SPS he didn’t panic but rolled onto his back and kicked himself back to the log and clambered up. He was a bit shocked and shaken but otherwise OK and did the right thing which as parents was great to see. 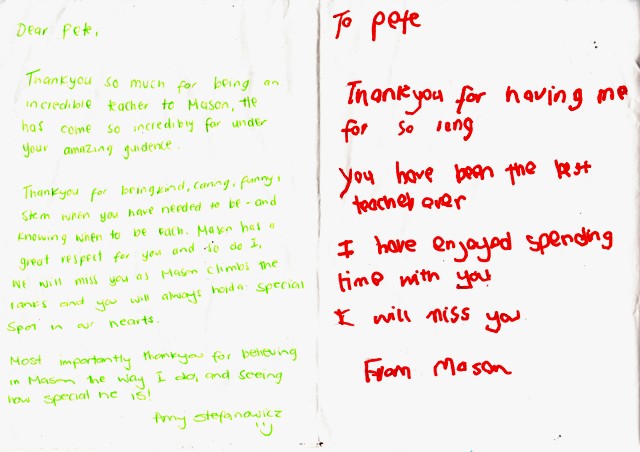 A thank-you letter from Student and Parent to teacher.